Why Medium Lost Half of its Visibility

Medium is a trusted user-generated content publisher.  It even employs an engagement-based model to pay its contributors through paywalled articles. On paper, it’s an ideal platform for aspiring and professional writers alike. However, according to Searchmetrics and Sistrix, Medium’s top level domain recently saw a 40% drop in organic visibility in desktop and 50% in mobile.

So what happened? Did you say CLOAKING!!!

Trending topics don't stop, neither should your tracking platform. With NewzDash you are able to track rankings in Google SERPs near real-time and capture insights that enable you to boost your visiblity in Search.

Based on the latest analysis we did on 1/6, thehill.com leads the Top Stories in Google SERPs, followed by FOXnews.com, Politico.com and NYTimes.com. When is comes to Top Web Results it is WashingtonPost.com, CNN.com, YouTube.com and then FOXnews.com.

Funny enough the Top question Google display is "Why was Clinton impeached? in the People Also Ask/Search For.

Shay Harel, the founder of RankRanger, spotted Google showing a tweet, yes, a post from Twitter, in the Google featured snippet section and people also ask section. Here is his screen shots via Mordy on Twitter. source

You can track twitter appearances in Google Web Results using NewzDash.com Screenshot below for top twitter accounts in Google SERPs for CONOR MCGREGOR 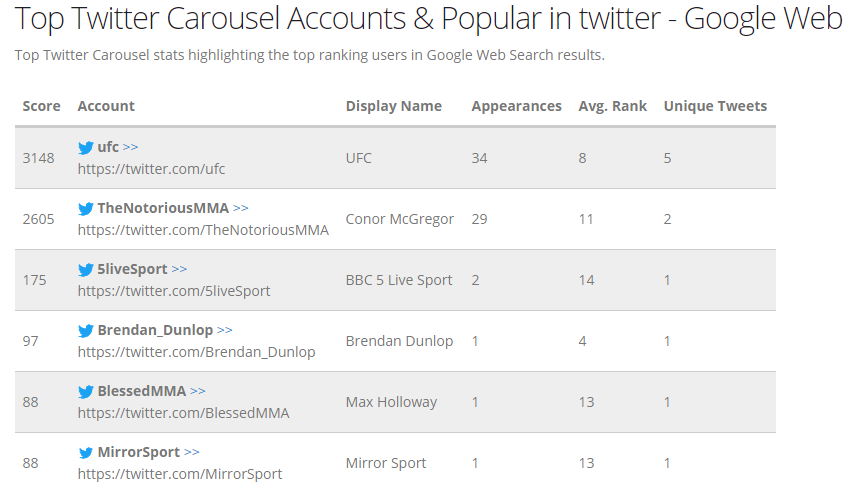 In 2019, Google introduced a new format in mobile search results which included a small “favicon” icon from the website, to the left of the snippet. This week, Google announced that a similar format was being launched in desktop results.     Source: SEJ

Google’s Chrome version 80 will begin blocking website push notifications. While Chrome will allow users to opt-in to the push blocking, some sites will be automatically enrolled into the blocking feature. Publishers and developers are urged to read Google’s best practices to avoid having their push notifications blocked.
Source: SEJ

Pinterest is much smaller than its tech giant competitors Instagram, Amazon, and Google. But the visual discovery platform has established a quietly radical approach to search: deliberately engineering results to avoid harm, and holding itself accountable for unintended consequences. Source: Vox